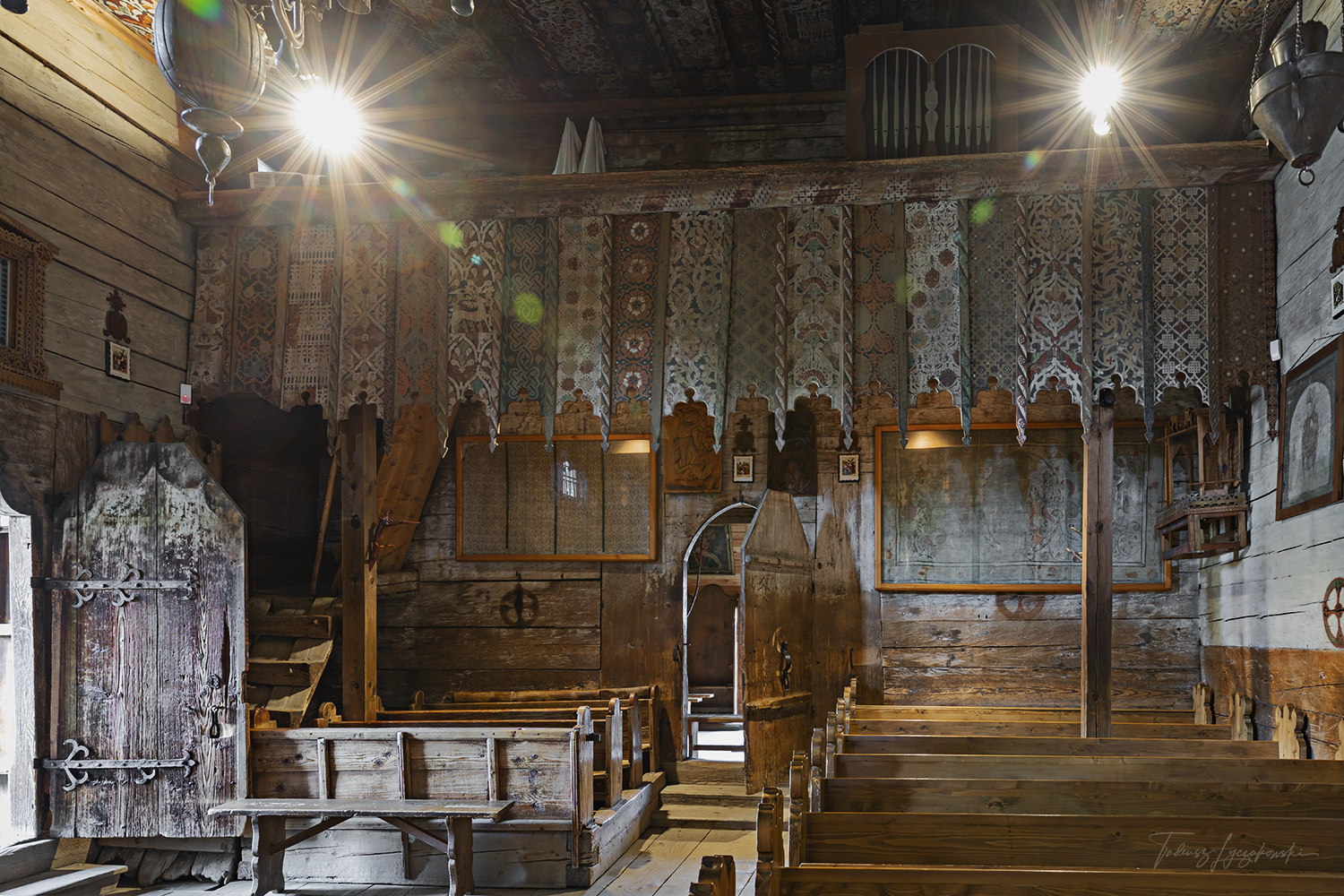 The church in Debno Podhalanskie, a splendid testimony of Polish culture and of Podhale people’s capability, is numbered among the highest-class monuments. This Gothic church was built of larch wood in the middle of the 15th century. Its structure was joined by notching and reinforced with spiles, but with no nails.

The wall-painting of the church is a valuable polychromy which dates back to the end of the 15th century. It was made in Gothic style with 33 colours and 77 different patterns, also Persian and Chinese ones, and with a Jagellonian eagle above the Cross. The paintings have kept their fastness for 500 years up to the present. The secret of colour fastness has never been found out.

The interior fittings of the church are also interesting: The high altar has a superb triptych dating from the end of the 15th or beginning of the 16th century. It represents so-called Hoły Conversation and was made by the school of Krakow-Sacz. It makes a good example of transition from Gothic to Renaissance art. The beautiful crucifix on the rood-screen, so-called Tree of Life, dates back to 1380. The author availed himself of the natural cros-schape of a bough to make the crucifix. The side aitars, in baroque style, date from the 17th century. The five Gothic figures on the left-hand altar constitute a so-called Procession of Five Yirgins, sculptured in 1440. The Gothic wooden tabernacle on the wall near by is the only relic of its sort, dating back to the 14-th century. It has not been used for more than 300 years. The Gothic figure of Saint Nicholas next to the tabernacle was sculptured in 1420. The banner made of painted linen dates from the 16 th century. It was left here when king John III Sobieski was coming back from Vienna after having won the victory over Turks. The two cloths with flower patterns on the side wall and under the gallery are altar curtains, dating from the 16th century. They are very shabby now. The curious glockenspiel on the stairs of the high altar was made in the 15th century and is used instead of bells while a mass is said. Its thinner bar produces low notes and the thicker one high notes, i. e. against the law of physics. The modern figures were mostly carved by the late Jozef Janos, a self-instructed folksculptor of this place. Popular tradition says that Janosik, the greatest mountaineer hero, often used to be in this church. The church is still used for religious purposes and supported by parishioners’ contribution.

INFORMATION FOR TOURISTS: Church visiting: * Monday – Saturday 9:00 a.m. to 12:00 a.m. and 1:00 p.m. to 5:00 p.m.  Sunday: 12 a.m to 5 p.m. Note! On rainy days church is not accessible to high air humidity which is dangerous to the building. Visitors are kindly requested to bring offerings for upkeep of this church. Please, drop them into collecting-boxes. May God requite you